Yoga and especially the asana practices so popular in the West are part of an oral tradition dating back thousands of years. It is a tradition marked by interpretations rather than absolutes, even though many who claim to be “teachers” would have you think otherwise. I believe anyone who claims that his or her approach is the true yoga, is no different than any fundamentalist claiming a direct link to the “Truth.” We are a long way from the belief that yoga could only be practiced by twice born (male) Brahmans, or the admonition in the Hatha Yoga Pradipika, that in preparing one’s space for asana, it is first necessary to spread a fresh layer of cow dung on the walls

The teachers below have inspired me by the integrity of their teachings, their humility, and their flexibility of attitude:

TKV Desikachar is the son and student of T Krishnamacharya  For over 50 years, TKV Desikachar has devoted himself to making yoga relevant to people from all walks of life and with all kinds of abilities. His teaching method is based on Krishnamacharya’s fundamental principle that yoga must always be adapted to an individual’s changing needs in order to derive the maximum therapeutic benefit.

Kathleen Miller has been practicing and teaching more years than she’d probably like us to know. When I was convinced my questions and perspective were pretty off the wall given the trends in yoga in the last couple of decades, she introduced me to the teachings of TKV Desikachar…It was great to come in from the cold. She also taught me a healthy disdain for the limelight.

Erich Schiffmann was initially drawn to the architectural precision of the asanas. But over time he realized their value was in their ability to focus ones attention much like other vehicles of meditation. His “serious lightheartedness” has inspired me from the fist class i took with him 20 years ago (and the  3 days it took me to recover from an overzealous ego).

Sarah Powers inspired me to remember no matter what your body does, yoga is essentially an inner practice.

Saul David Raye reminded me that the essence of enlightenment is to lighten up,

“It is only possible to find the qualities that are essential to asana if we recognize our own starting point and learn to accept it.”
—T.K.V. Desikachar 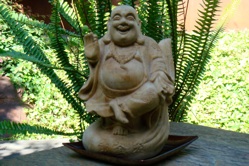